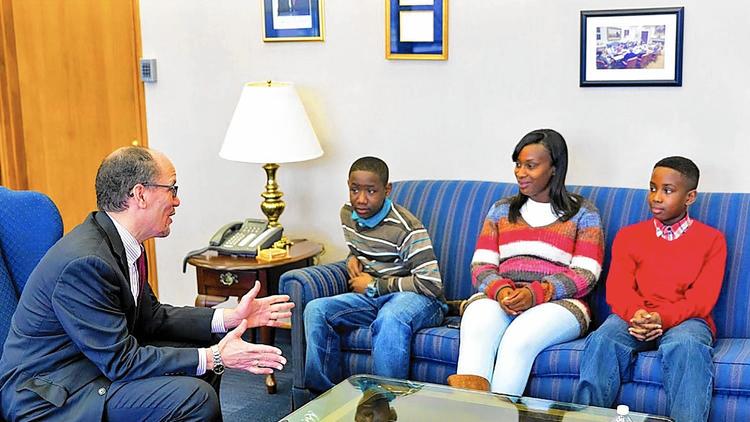 (1/21/15) — A year ago, LeDaya Epps of Compton was unemployed and raising three children on her own, struggling to keep her car running to search for jobs.

On Tuesday night, she was sitting in the U.S. Capitol for the State of the Union address, a guest of First Lady Michelle Obama. Through the help of community organizations pushing for greater inclusion of African American workers, Epps has earned a good paycheck for more than six months helping to build the Crenshaw/LAX light-rail line.

Epps’ improving fortunes stem from an approach experts say could alleviate persistently high unemployment in the black community. An agreement involving government, organized labor and community organizations has required contractors to provide more opportunities for disadvantaged workers to get jobs on the rail project.

It’s an effort to create pipelines for black workers into higher-paying industries such as construction. Without such intervention, success often comes down to connections rather than qualifications, said Lola Smallwood Cuevas, director of the Los Angeles Black Worker Center, an affiliate of the UCLA Labor Center.

“It’s a question of the social networks around the work,” said Cuevas, whose organization helped Epps find work. “How do you crack what has historically been a difficult industry for women, and for black workers in particular?”

African American unemployment rates have historically been about twice as high as those for white workers. That trend continued through the Great Recession, with black unemployment reaching a peak of 16.6% in April 2010.

More than five years into the economic recovery, black unemployment in December stood at 10.4%, compared with 4.8% for white workers.

Unemployment captures only one part of the picture, said Steven Pitts, associate chair of UC Berkeley’s Labor Center. Just as important are the disparities in low-wage work.

According to research by the Labor Center, 14.3% of black men with full-time jobs in Los Angeles were considered low-income workers; for women, it was 16.7%.

As such, simply tackling the problem of unemployment doesn’t get at the broader question of whether African American workers are able to improve their lives through better-paying jobs.

“How do we set up new mechanisms and new pathways into jobs that are good?” Pitts asked.

When the group started looking at the Crenshaw line project in 2013, almost no black workers were employed on the project, she said. Since then, the group’s efforts have boosted African American representation to about 20%.

Epps, 38, had been unemployed for two years before coming in contact with the Black Worker Center at a local job fair.

Much of her life had been an uphill battle. She was raised in a foster home until the ninth grade. She went to school to be a medical assistant and worked for several years as an in-home caregiver, but found that the pay wasn’t enough to support her family.

Epps worked for a while doing cleanup on construction sites, preparing them for final inspection. When she got laid off, she struggled to find a new job in the industry.

The Black Worker Center connected her with PVJobs, a nonprofit that helps struggling workers link up with employers in construction and other industries. From there, Epps went through a grueling five-day construction “boot camp,” lifting 12-foot planks, 96-pound sandbags and enormous concrete bricks for eight hours at a time.

In the end, she got placed on the rail project as an apprentice with the Laborers’ International Union of North America.

“When it comes to construction, you mainly think it’s a field for men,” Epps said. “A lot of women probably don’t think they can do something like that.”

For the first time in many years, she’s feeling optimistic about her children’s prospects for a better life.

Epps’ story attracted the attention of U.S. Labor Secretary Thomas Perez last summer during a visit to Los Angeles, which prompted the invitation to Tuesday night’s big speech at the Capitol.

President Obama hinted at the importance of training opportunities in lifting workers’ wages across the country.

“I’m also asking more businesses to follow the lead of companies like CVS and UPS, and offer more educational benefits and paid apprenticeships,” Obama said, “opportunities that give workers the chance to earn higher-paying jobs even if they don’t have a higher education.”

Sherri Bell, a community organizer with the Black Worker Center, helped Epps secure the apprenticeship and has high hopes for her long-term success. But she said the future will depend on concerted efforts by community groups to include disadvantaged workers in major projects.

“We put pressure on the contractor to help them know about black workers and women,” Bell said. “Her longevity in this industry is going to depend on these partnerships, and advocating that these opportunities are increased.”