The Working While Black Campaign

WIN reports that Black work is synonymous with low pay, Congressional Black Caucus is looking to change that 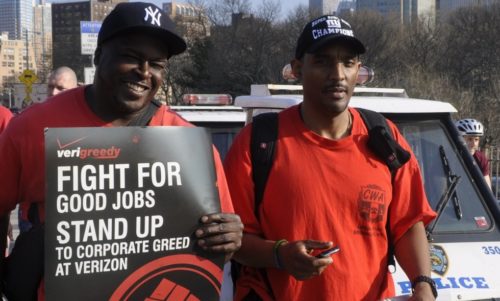 The National Black Worker Center Project is launching a #Working While Black campaign advocating a “New Deal for Black America”.

Executive Director Tanya Wallace-Goburn says to Trump and members of Congress that they should bring an end to the economic abuses of Black workers with a vision that goes beyond the desire for political power.

[Tanya Wallace-Goburn]: “Rather than focusing on filling the pockets of and wallets of billionaires, we need to focus on building projects that don’t extract wealth from our communities and build wealth within our communities.

And that’s something that all of us – no matter what your race or ethnicity is – can align with.”

The #Working While Black campaign will expose the impacts of racial and economic injustice in the workplace through workers telling their stories.

[Tanya Wallace-Goburn] :”And our goal is to launch a strategic communications and organizing campaign that’s designed to mobilize and communicate the experiences and challenges, aspirations and achievements of Black workers.

The Congressional Black Caucus is urging Trump to seek its council on “The New Deal For Black America” And Wallace-Goburn says the national Black Worker Center Project partners with organized labor.

[Tanya Wallace-Goburn]: “We consider ourselves fortunate to partner with organized labor.

The main ways that we see participation is in our membership. There are many African-Americans that are members of unions and they are also members and supporters of the National Black Worker Center Project.

The other way that we’ve been able to partner with labor is in understanding the necessity to having better jobs created.”